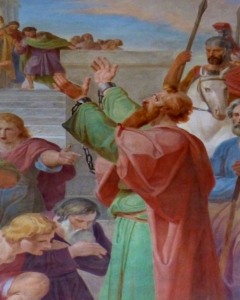 After three months we put out to sea in a ship that had wintered in the island.  It was an Alexandrian ship with the figurehead of the twin gods Castor and Pollux.  We put in at Syracuse and stayed there three days.  From there we set sail and arrived at Rhegium.  The next day the south wind came up, and on the following day we reached Puteoli.  There we found some brothers who invited us to spend a week with them.  And so we went to Rome.  The brothers there had heard that we were coming, and they traveled as far as the Forum of Appius and the Three Taverns to meet us.  At the sight of these men Paul thanked God and was encouraged.  When we got to Rome, Paul was allowed to live by himself, with a soldier to guard him. 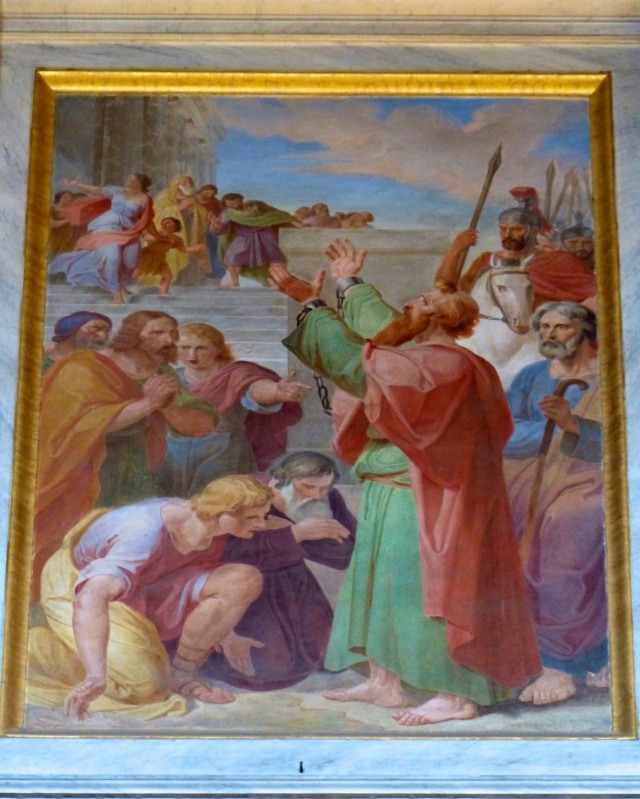 After the hostile meetings in Jerusalem, and the risky travels to Rome, Paul arrives in several Roman towns on his way to Rome.  While he is still imprisoned, as indicated by his wrist shackles and Roman guards on horseback, he has relative freedom to live outside prison and greet the Christians in the towns and Rome.  We see them running briskly down the steps from a columned building and kneeling before him.  In contrast to the snake incident on Malta, their reverence appears to be in praise and gratitude for his safe passage, rather than deeming him a deity.