In  an evening of theatre, traditionally, the play is divided into two sections, with a fifteen to twenty-minute intermission for the audience to get up, stretch, use the bathroom, get a snack or drink, and maybe even chat with one’s theatre companions about the direction of the play.  At the Blackfriar Theatre, in Staunton, VA, the company calls this “an interlude”.  Just as an interlude in the theatre is a useful change of pace, we have interludes in our daily lives.  Lunch breaks at work, walking the dogs to the mail box after a morning in the garden, prayers and devotions, vacations, and… therapy.My regular readers may recall that in my work-day, I put on the role of an occupational therapist.  Rehabilitation is an interlude between injury and recovery.  While on the surface my job is help people get back to their day-to-day activities, often what I find I help people with is to adapt their beliefs to their realities.  Broken wrist? Maybe neglecting the hazard that contributed to the fall is what needs to be address once you can use her hand again.  Stroke?  Maybe learning to do tasks with different movement patterns, sensory awareness,  or cognitive abilities needs to be conceptualized to form a new routine.  Depression, anxiety?  Maybe one’s expectations, sense of success and failure, life experiences that contributed to these beliefs, and new skills to cope with the distressful aspect of life needs to be explored to resolve potential conflicts. 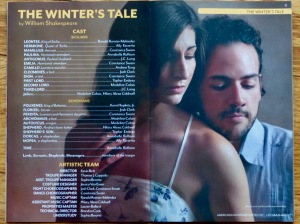 Shakespeare’s play, The Winter’s Tale, has an interlude built into the structure.  Between Act III and IV, sixteen years pass.  At the beginning of Act IV, Time (Annabelle Rollinson) reflects on the passage of time, the opportunities that this offers and resistance we may have to make changes from the events that occurred in Acts I to III.

By the end of Act III, Polixenes has escaped from the castle to return to his Bohemia, Leontes’ and Hermione’s son, Mamillius (Constance Swain), has died of illness, Hermione has borne a daughter but died herself, the infant has been sent off by Leontes to be left to die by Antigonus (Michael Hahalyak), Pauline’s husband, who meets and is dismembered by a bear (Topher Embrey).  Oh my, did you get all that?  Sounds like Leontes is going to need some therapy… an interlude.  He will take sixteen years to do this.

This brings us to the second of the American Shakespeare Center’s commissioned Shakespeare’s New Companion Plays, 16 Winters, or the Bear’s Tale, by Mary Elizabeth Hamilton.  As the title suggestions, this play fills in that interlude, showing us what these characters were up to over those winters.

The play is literally The Bear’s Tale, as Topher Embrey brilliantly narrates the winters both as the Bear and Time.  Ah, we need an animal or an abstraction to tell us how to be human.  Pauly (Annabelle Rollins) has stolen Her (Ally Farzetta) away from the castle, under the guise of her dying, to put her up in a hut in the king’s forest.  Leo (Ronald Roman-Melendez) mourns his son’s and wife’s death, while being visited/haunted by his son’s ghost (Constance Swain).

Over several of the winters they confront questions about the confines of social position, the superficiality of people enacting their assigned life roles, the conflicts between men and women, children and parents, masters and servants.  Who really needs whom?  What brings meaning to our lives?  How do I learn skills that my position in society has never required of me?  How do I love another?  Why has God abandoned me?  How do I seek or offer forgiveness?  These are played out in hilarious vignettes with Her learning how to cook and knit, and Leo learning to write poetry and songs.

After the interlude for both plays, we shift from the troubles in Sicilia to the bucolic, rustic life in Bohemia.  In The Winter’s Tale, the shepherds prepare for the festival of the sheep shearing.  Musicians, dancers, peddlers, and clowns mingle on stage in a celebratory romp.  In 16 Winters, free-thinking artists cohabit in a commune style group, indulging their senses in free art, free intoxication, and free sex (don’t confuse this with love)… funded by whoever is new to the group.

In The Winter’s Tale, we meet Florizel (Josh Clark), king Polixenes’ romantic son.  He will become Flory in 16 Winters.  We also meet Perdita (Constance Swain), Leontes’ daughter, who was found and reared by a Shepherd (Jocelyn Honore).  In 16 Winters she is P (Madeline Calais).  They become love interests, that youthful love, idealized, rebellious, without restraints of position and social obligation.

In 16 Winters the characters from the first section of the play, Her, Pauly, Leo, and others have come to Bohemia, searching for what they have lost or believe will fill their existential emptiness.  They learn the harsh realities of survival, find that reckless abandon is as empty as rigid social conformity, and find their muses.  We are ready for Act V of The Winter’s Tale.

In Act V, Paulina comforts Leonte that after 16 years of mourning, he can find peace and reconciliation for his lost family.  Florizel and Perdita have come to Sicilia, followed by Polixenes.   Leontes meets with them, learning that his daughter is alive and come home.  Polixenes’ and Leontes’ friendship is restored.  They accept their childrens’ union in marriage, even though outside of  the social norms of the state.  And, through a magical scene Paulina brings a statue of Hermione to life.  The family is united.  Order is restored.  But, oh, how many years and experiences this all took.  Shakespeare has left this to Ms. Hamilton’s imagination to bring to life, centuries later.

The town in which I work is a college town.  A good portion of the clients whom I see are therefore in their early 20’s.  They are filled with ambition and anxieties about their transformation from childhood to adults.  Often our discussions revolve around two themes, justice and mercy.  They want justice to correct the ills of family, society,  and wrongs that others have foisted upon them.  I encourage them to use their energy to bring justice to their worlds.  And, I temper this with admonition that they also offer mercy to those who have offended them.   How long does this process from childhood to adult take?  Maybe sixteen years or so.

Seek justice. Give mercy.  Forgiveness.  Can we bear the civilizing behavior that turns Winter will turn to Spring?

Up here in the mountains, we have a saying, "You can't get there from here", which really means "We wouldn't go the trouble to do that". Another concept is that "If you don't know, we ain't telling." For the rest, you'll have to read between the lines.
View all posts by hermitsdoor →
This entry was posted in Lights On Stage, Reviews and tagged American Shakespeare Center, Blackfriar Theatre, Theatre. Bookmark the permalink.