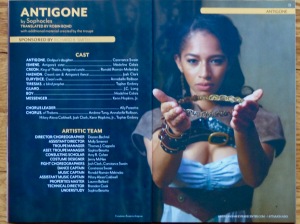 There is a reason that some stories have been told, and retold for generations.  The last time we saw a production of Sophocles’ Antigone was about 20 years ago at the Shakespeare Theatre in Washington, D.C.  Friday evening, we saw a new production, and translation by Robin Bond, at the American Shakespeare Center’s Blackfriar Theatre in Staunton, VA.  All the usual Greek tragedy elements were there: heroes/heroines, villains, curses/fates we cannot escape, scenes and the chorus.  Each production added elements to test out the oft-told story in different settings.  The D.C. production set the events in an African tribal community of some distant past time.  The Blackfriar production gave us a Greek style tunic-robed cast in an imaginary time and place.  But, they brough contemporary music and rap to fill out the chorus’ poetic lines.

To understand Antigone, you must be reminded of the back-story of Oedipus.  The chorus reviews this in song, reciprocal poetry, and tableau scenes, in which Oedipus is abandoned by his parents because of the Oracle’s curse, is reared by a shepherd, later meets and kills his father (unknown to him) along a road, marries is mother (unknown to him), father’s twin boys (Polynices and Eteacles) and twin daughters (Antigone and Ismene).  Oedipus, upon learning that he has acted out the fated curse, gouges out his eyes, goes into exile and dies.  Okay, we have a couple more hours of play to go.

Polynices becomes ruler of Thebes, with the promise that he will alternate years on the throne with his brother, Eteocles.  You can guess that this does not work so well.  They mutually kill each other.  Their uncle, Creon, takes the throne.  Creon (Ronald Roman-Melendez) gives Polynices an  honorable burial, but condemns Eteocles to lie unburied to warn others of the dishonor of rebelling against the ruler.

Antigone (Constance Swain) attempts to elicit Ismene (Madeline Calais) to bury Eteocles at night to give him a proper burial.  The internal struggle of family attempting to right the curse, and the external struggle of the city attempting to find peace fills the rest of the action of the play.  Various characters debate what action is right, while we, the audience, watch helplessly observing the community deteriorate into chaos and death.  Antigone epitomizes the tragedy in her lines about how stupidity and stubbornness, rather than wisdom and compassion, have fulfilled the curse.

But, her warning is too late.  Most die on or off stage, as the chorus laments their inability to change course.

A thought lingered in the back of my mind while watching this production. This thought was quite tangential and circumstantial.  By the fate of our schedule, we were watching this tragedy on Good Friday.  At first this might seem a bit sacrilegious.  However, after arriving home, while winding down from all the death and mayhem, I picked up The Golden Legend to read (for those who do not recall, this is a 13th century compilation of stories, by Jacobus de Voragine, of the early church saints and events in Christianity, translated by William Graner Ryan, published by Princeton University Press, 1993).

As it was Good Friday, I thought that reading the legend of the Passion of Christ would be in order.  This, of course, begins at night/early morning of the day, when Judas betray’s Jesus in the garden.  For 30 pieces of silver, he identifies Jesus so that the priests and soliders can arrest him.  In a footnote to this legend, I was referred to the legend of St. Matthias (who filled Judas’ position after Judas hanged himself) to learn the back-story of Judas.  Now, this was getting interesting.

We read in a certain admittedly apocryphal history that there was in Jerusalem, Ruben by name, who was also called Simon, of the tribe of Dan, or, as Jerome has it, of the tribe of Issachar, and who had a wife named Cyborea.  One night, after they had paid each other the marital debt, Cyborea fell asleep and had a dream that she related, terrified, sobbing and groaning, to her husband.  She said, “I dreamed that I was going to bear a son so wicked that he would bring ruin upon our whole people.”  Ruben: “That’s a very bad thing you are saying, a thing that should not be repeated, and I think a divining spirit had told of you!”  “If I find that I have conceived and if I bear a son,”  she said, “there can be no doubt that it was not a divining spirit but a revelation of the truth.”

In due time the son was a born, and the parents, filled with fear, began to wonder what to do with him.  They abhorred the thought of killing him but were unwilling to nurture the destroyer of their people, so they put the infant in a basket, which they set afloat in the sea, and the waves carried it to an island called Scariot.  Judas there took the surname of Iscariot from the island.  They queen of this island, who was childless, was walking on the beach.  She saw the basket floating in the surf  and had it brought ashore.  In it she found the beautifully formed infant and sighed: “Oh, if only I might a such a child, how relieved I would be, because my kingdom would not be left without a successor by my death!”  She therefore had the infant nursed secretly while she pretended to be pregnant.  When the time came, she lied by announcing that she had borne a son, and the word spread throughout the kingdom.  The king was overjoyed at having a son, and the whole nation shared his joy.  The child, of course, was brought up in royal style.

Not long afterward, however, the queen conceived of the king and gave birth to a son.  As the two boys grew up, they often played together, and Judas frequently maltreated the royal child and made him cry.  They queen resented this and, knowing that Judas was not her son, often chastised him for his misdeeds, but Judas continued as bad as ever.  Finally the truth came out and it was known that he was not the queen’s child but a foundling.  When Judas himself learned this, he was bitterly ashamed and secretly killed the king’s son, who had been thought to be his brother.  Then, fearing that he would be put to death for this crime, he fled to Jerusalem with other youths who were part of a tribute payment, and took service (like finding like) in the household of Pilate, who was the governor of Judea.  Pilate noticed that Judas was a man after his own heart, and began to treat him as a favorite, finally putting him in charge of his whole domain; and Judas’ word was law.

One day Pilate was looking out from his palace at a nearby orchard and was seized with such a desire for some of the fruit that he almost fainted.  The orchard belonged to Ruben, Judas’ father, but Judas did not recognize his father nor did Ruben know his son, because Ruben thought that his child had perished in the sea, and Judas had no idea who his father was or where he came from.  Pilate called for Judas and told him: “I crave that fruit so much that if I don’t get some of it, I’ll die!”  Thus prompted, Judas jumped over into the orchard and speedily picked some apples.  At that moment Ruben came along and found Judas picking his apples, whereupon a violet argument started, word led to insults, and insults to blows and injuries on both sides.  Finally Judas struck Ruben at the back of the neck with a stone and killed him. He then delivered the apples to Pilate and told him what had happened.

As daylight faded and night came on, Ruben’s body was found and it was thought that he had been overtaken by sudden death.  Pilate awarded all Ruben’s belonging, including his wife Cyborea, to Judas.  Then one day Judas, finding Cyborea heavyhearted and tearful, urged her to tell him what was troubling her.  “Alas, I am the unhappiest of women,” she answered.  “I drowned my baby son in the sea, I found my husband stricken with sudden death, and to all mu sorrows Pilate has add a new one, handing me over, saddened as I am and totally unwilling to be your wife!”  She went on to tell him all about her baby, and Judas told her all that had happened to him.  So they discovered that he had taken his mother to wife and had killed his father.  Cyborea then persuaded him to repent, and he turned to our Lord Jesus Christ and begged forgiveness of all his crimes.  So far, however, what we have set down come from the aforesaid apocryphal history, and whether it should be retold is left to the reader’s judgement, though probably it is better left aside than repeated

So there you are… Oedipus = Judas, cursed and fated to bring great shame to the community.  Thus, we go to see a play, which turns out to occur on Good Friday, which leads me to read about Good Friday, which brings me back to the story that was in the play.

Some may scoff that the early Christians were just recycling Sophocles’ narrative of Oedipus.  Some may say that Oedipus, like Judas, was the worst of people, thus co-opting the popular story about one rotten person to vilify another is understandable.  I am inclined to doubt the historical accuracy of the legend of Judas, but accept the truth of applying the Oedipus scenario upon Judas because is says something about us, what true evil is, and the result of that evil.

Which brings us back to Antigone.  If the message of Antigone is that wisdom and reason overcome curses and fates, what is the Christian equivalent?  Antigone = ?  I will leave that for you to ponder.

Up here in the mountains, we have a saying, "You can't get there from here", which really means "We wouldn't go the trouble to do that". Another concept is that "If you don't know, we ain't telling." For the rest, you'll have to read between the lines.
View all posts by hermitsdoor →
This entry was posted in Lights On Stage, Reviews and tagged American Shakespeare Center, Blackfriar Theatre, Faith, Theatre. Bookmark the permalink.