Last weekend, we headed into Washington, D.C. to see a couple of plays at Arena Stage (reviews to follow).  Though we had not planned for another annual event, it happened to be Cherry Blossom Festival weekend too.  And, the cherry trees around the Mall, Tidal Basin, and Hanes Point were near peak bloom.  If you have even been in D.C. for Cherry Blossom Festival, you know that this means: traffic jams.

Our first play was Saturday evening.  We came in early to enjoy an afternoon with friends on their deck in Alexandria, VA, just across the Potomac from the pink and white blossoms.  Usually, we could drive over the 14th Street Bridge and find our obscure street parking (ain’t telling where) in 20 minutes.  We left 2 hours early. 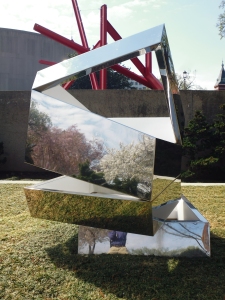 Good deal, as the 14th Street Bridge was a parking-lot (who in the DOT decided that this was good time to do road work on the express lanes, thereby close 2 lanes over the bridge?).  We did make the crossing on our next alternative, the Memorial Bridge (who in the  DOT decided to close 2 lanes for construction?).  This put us on Constitution Avenue at 23rd Street.  We had to get past 14th Street to be beyond those wanting to drive around the Tidal Basin for a look a the cherry trees near the Jefferson, Roosevelt, and Martin Luther King, Jr. monuments.

An hour and 15 minutes later, we were securely in our parking space (ain’t telling where), and six blocks from the theatre.

We repeated the exercise Sunday morning, prior to the matinée performance.  Rather than joining the crowds walking around the main event, we decided that we were only a few blocks from the sculpture gardens at the Hirshorn Museum and National Gallery on the Mall.  Though fewer in number, we had sufficient cherry trees to enjoy with the sculpture.

Up here in the mountains, we have a saying, "You can't get there from here", which really means "We wouldn't go the trouble to do that". Another concept is that "If you don't know, we ain't telling." For the rest, you'll have to read between the lines.
View all posts by hermitsdoor →
This entry was posted in Farm Life and tagged Gardening, Walks. Bookmark the permalink.