Posted on December 8, 2017 by hermitsdoor 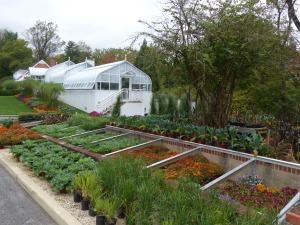 For some years, the head garden designer here has wanted a greenhouse.  We have been starting seeds in windows in an east-side room.  But, this means dirt, etc. in the house.  A greenhouse would keep the garden implements and soil outside, and give us a jump on the season.  However, we did not want to invest a lot of expense into something that might not work well in our region.  This past Spring someone told us about a low cost greenhouse that he had purchased at a local hardward store.  A six-by-eight foot verson was on sale at a good price.  We brought the kit home with plans to assemble it over the summer between other garden tasks.  The first line of the instructions that caught my eye were “start with level ground” 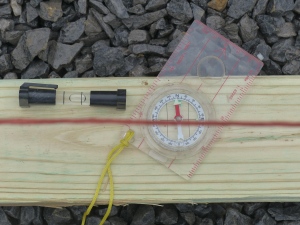 Level ground!?  We live at 2000 feet on the side of a mountain in the Appalanchian region.  There is no level ground here.

We had already planned for a future structure off the side of our driveway.  Since we purchased a tractor a few years back, our long-range plan was to build a shed for it, and other outdoor tools, with a greenhouse on the south side.  I even aligned the area that we had built up with shale to have a side facing directly south for the best greenhouse exposure.  But, th edges sloped down toward the mountain contour on which it was built. 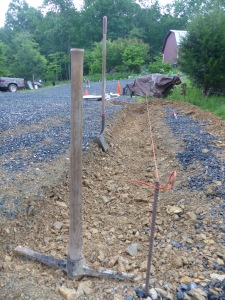 Okay, before leveling the area for the greenhouse, I would need to build a retaining wall against this slope.

Project two, if I were to build a retaining wall, could this become another garden area?  Some years ago, we began experimenting with cold frames.  These are about two-by-three foot boxes with an old window mounted on hinges on top.  A heat sensitive lever-arm raises the window up on warm days and leaves it down during cold snaps.  We had six of these in which we grew cool weather greens.  However, we had found that they took up a lot of garden space.

Thus, I decided to build a raised garden bed for these six cold-frames as part of the retaining wall.  This would be six-feet wide by 25 feet long.  I could fit six cinder blocks into the trunk of our Honda Civic at one time.  Over the summer, I hauled home a six-pack of cinder blocks until I had enough to make the cold-frame garden.

Then I needed to dig level trenches on the slope to fill with gravel for drainage.  The walls went up.  Now, all this needed back-filling with soil.  But, first to set  health bed for fungus grown, I put a layer of wood on the ground, then covered this with several layers of hay and manure form the barn and leaves from ditches.  Finally, layers of silt and compost gave us a good bed of soil about two feet high.  The cold frames sit on this and are growing winter salad greens.

All that was to get to that first step of makig a level spot for the greenhouse.  The next step was to build a base.  This consisted of four two-by-twelve and six-by-six boards, sealed and bolted together.  I could lift each 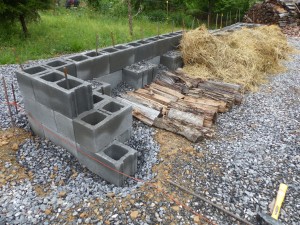 board alone, and two boards bolted together, but not the whole frame assembled.

Okay, assemble it in the garage near the electrical outlet, then disconnected the four corners.  Put, the four sides into the truck to drive them 100 feet to where the greenhouse would go up, off-load each side, and re-attach them by hand.  Get out the level.  Ah, only 1/4 of an inch off.  A few tiles under selected corners and it the base is level. 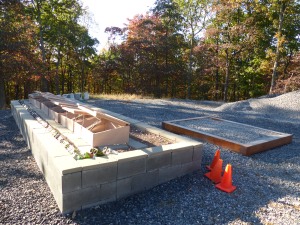 I used the tractor bucket to fill the base with gravel for stability.  Now to lay out these Erector-Set style frame and begin tigthening screws.

The frame for the greenhouse would have to wait for another pleasant Fall day.  Each piece of the frame had a number.  This should be easy.  A friend came out for the weekend so that we could reach each line of the instructions to try to figure out what was lost in translation from the factory in China.  With a little guess work and a few trial-and-errors attempts to fit bolts into the wrong places, we had the framework up by dinner time. 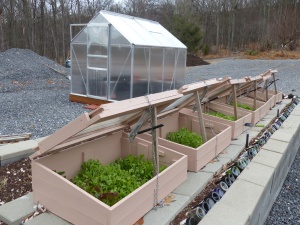 The friend who recommended this kit had suggested that the wire clips that hold the plastic panels in place were fine on a calm day.  But he recommended using sheet-metal screws to secure the panels against a windy storm.  Three hours of setting the panels into place and three boxes of sheet-metal screws later, the exterior was complete.  Another hour gave me several experiments in getting the pneumatic arms to work on the vent windows.

Time to buy some shelves and set up for winter planting.

By the way, the first photo if of the greenhouse at Hillwood House in Washington, D.C., home and gardens of Marjorie Marriweather Post.  Notice that they too have cold frames next to their greenhouse… just a little larger than ours.

Up here in the mountains, we have a saying, "You can't get there from here", which really means "We wouldn't go the trouble to do that". Another concept is that "If you don't know, we ain't telling." For the rest, you'll have to read between the lines.
View all posts by hermitsdoor →
This entry was posted in Farm Life and tagged Gardening, Labor. Bookmark the permalink.