From the Bookshelf: The World is Flat, and Requiem for the American Dream

Recently, my mother gave me a book to read, Noam Chomsky’s Requiem for the American Dream. Some years ago, she had given me Thomas L. Friedman’s The World is Flat, which I have neglected on my shelf as dust gathered. Whether shame, enthusiasm, or just a desire to not fall too far behind on my reading, I dedicated Spring to consuming these two texts.

Now, you might expect your mother in her 80’s would be passing along novels and travel books as she divests of the material possessions from her life journey. From the two titles, you can gather that my mother is just revving up her repressed 1960’s radicalism… I also have noted over my last few visits to my parents home that The PBS Newshour is followed by Amy Goodman’s Democracy Now rather than FOX News rants. Rock On, Mom.

When I was in college 35 years ago, I used to listen to such programming on KPFA radio out of Berkeley, CA. Having grown up in a stalwart conservative family, I thought that even though I lived some miles away from home, I had to listen to such news outlets on a low volume with all the lights out so that no one would discover that I was being influenced by efforts to divest in South African investments to protest Apartheid. 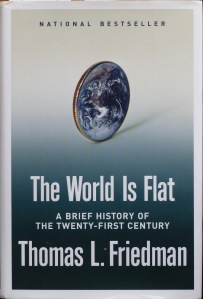 This theme of how the world connects, is the topic of Friedman’s text, The World is Flat: A Brief History of the Twenty-First Century. Odd, I thought that a book about the 21st century could be written in only the first decade of that century (it was published in 2005, thus in Internet speed, “So 2005”). Kind of like writing about the 20th century in 1905.

But then, the turn-of-20th-century Boer Wars in South Africa did point to what would happen in the next 90 years: surrogate countries playing out world politics, oppressive nations putting the suppressed into concentration camps, development of new technologies in weaponry and trying them out in those surrogate countries, guerrilla warfare toppling the organized military forces… any of that happen from 1914 – 1918, 1939 – 1945, 1950’s, 1960’s to 1970’s, 1980’s… name your world conflict, the Boer Wars foretold them all.

The World is Flat is about how the Internet developed and then transformed the world of economics, social affiliation, and politics. Back in my college years, in the early 1980’s, my sources for information were the local newspaper (San Jose Mercury News), the radio (NPR & Pacifica Network), and weekly magazines (US News & World Report). A daily national newspaper (USA Today) started publishing during my college years, using a satellites to beam the content to local printers across the country. The three national TV news networks (ABC, CBS, NBC) gave the nightly news, but I did not own a TV at that time. Cable TV was just getting dug into people’s homes and MTV was, like, cutting edge. The world was not flat.

Friedman’s premise is that as technology developed (e.g. computers and microprocessors) and the infrastructure for those technologies were set in place (e.g. fiberoptic lines across oceans and satellites in low earth orbit), then the world became flat because the Internet allowed people to instantly connect with each other with limited obstruction from national boundaries.

Globalization has become a nasty word in the past couple of years, primarily as it is used to blame various national and international miseries (e.g. shifting of work and production, religious conflicts, military and para-military conflicts). But, globalization has been going on for 500 years, since the English, French, and Dutch have been sailing around in search of trade routes and resources… which of course gets us back to why they were in Cape Town to Pretoria, South Africa, and those Boer Wars in 1899.

Friedman gives detailed examples of how companies utilized technology to organize manufacturing, distribution, and transportation of supplies and merchandize. You will recognize the names: Microsoft, Apple, WalMart, UPS, et al. He also gives backstories to how medical technologies and service representative work, which could be put into digital formats, became more efficient to process across the Pacific and Indian Oceans than in the USA and Europe. In a parallel fashion, he sees how ideas crossing the oceans both ways have expanded our (USA and Europe) understanding of how the other 80% of the world lives, and how people in other parts of the world have begun to see what liberty allows.

Friedman’s message is mostly optimistic, with his expectation that companies, political systems, and individuals grasp the global reigns to benefit from the connections that we can have in a flat world. I can sit in my log cabin, or a motel, or a coffee shop, with my computer, type away at any idea that floats-my-boat, download it to my blog, and press “publish” to be my one-man news and editorial source. My loyal readers and anyone else who is curious can open my blog and see whether today’s post is about politics, travel, culture, or farm-life. What liberty!

At the end of the book, which again was written as the dust settled from 9/11/2001, Friedman also provides cautionary notes. This flat world can lead to brining conflicts from around the world to our doorsteps. Over the past decade, we have seen that tsunamis in the Pacific and Indian Oceans can shut down productions lines for factories in those regions as well as in our own boundaries. A local tragedy became a trending news cycle across the globe. People who hate each other have vast access to other people with common enemies. Formal lines of organization are irrelevant as “terrorist acts” need not be directed by some central planning committee. They are quite effective when someone is “influenced by” a post put out by someone in a cave or safe-house thousands of miles away.

The question Friedman asks, is how will we use our creativity and imagination? Will we advance society, bringing more and more people into the flat world through progress or destruction? Or, will we use technology to destroy civilization, segregating various tribes into geographic, walled boundaries, through which only the chosen are allowed to cross?

Anyone who has followed the news for the past decade would probably conclude that the later prophecy has occurred. 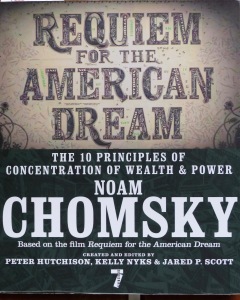 Noam Chomsky’s text, Requiem for the American Dream: The 10 Principles of Concentration of Wealth and Power, though not referencing Friedman’s theme, picks up the idea to explain why the later, pessimistic conclusion is inevitable.

Using excerpts from historic texts from the Enlightenment through the 20th century, Chomsky outlines how the USA’s politics and economy was set up to favor those with wealth and power. As much the Founding Father’s may have pitched the desire for liberty as a reason to cast off King George III, and to redesign society for the common man, the results were as likely as candidate Trump’s slogan to Make American Great Again. The system is set up to keep the laborer in his or her place, while the gains of society flow to a small group of those who already possess control of the political and economic systems.

The one hope that Chomsky holds for the oppressed 99% is education and political protest. Keep those pink pussy hats on folks.

What is the moral of reading these two books? Listen to your mother!

Up here in the mountains, we have a saying, "You can't get there from here", which really means "We wouldn't go the trouble to do that". Another concept is that "If you don't know, we ain't telling." For the rest, you'll have to read between the lines.
View all posts by hermitsdoor →
This entry was posted in From the Bookshelf and tagged Books, Culture. Bookmark the permalink.

9 Responses to From the Bookshelf: The World is Flat, and Requiem for the American Dream