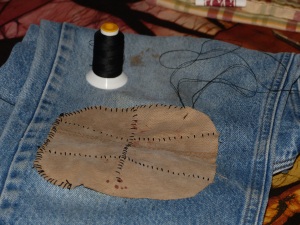 When my wife & I were courting 25 years ago, I enjoyed visiting with her family in New England.  Conversations were full of old-timey wit and wisdom.  Some of mottoes have stayed around with us through the years.  Her father was prime source for putting perspective on a situation, before filling one’s glass with another cocktail or wine.

Do something poorly the first time.  They won’t ask you to do it the second time.  This took care of chores for which you could not do to the standards of the person requesting.  Fortunately, within family units the one who was useless in the kitchen might be useful in some other capacity.

That’s what you get for being a Christian.  When one were inclined to lament having been charitable, one could be reminded that doing for others did not always have rewards.  And, it was your own fault for offering to get involved.

Love many.  Trust few.  Always paddle your own canoe.  Be your own boss.  Do not expect others to fulfill your needs.  When you had a conversation with someone while waiting for a table at a restaurant, you were not obligated to invite them to join you for dinner.  Having a bore for dinner was not the same as a good cut of pork chops.

That occurred under another administration.  Dating in your 30’s, it was expected that prior relationships had come and gone.  We did not need to refer to prior loves, or “ex’s”.  Those were just prior administrations.

Use it up. Wear it out.  Make do.  Or, do without.  When I heard this one from my object of desire, I knew that compatibility was assured.  I had grown up with this phrase, but assumed it was one of the Garrison Keillor Norwegian-Bachelor-Farmer origin mottoes.  This was instinctual, in comparison to the Ten Commandments which had to be learned.

Here we are 25 years later, living in a cabin the woods, using things up, wearing them out, making do.  In my rotation of garden pants, I usually have one pair that I keep for when we paint something.  They are on the short list.  Then there is the pair which I mainly keep because the pockets make good patches for the pair that I am wearing regularly.  Holes develop in the knees, but I can get another season of use out of them by patching those thin spots.

On one of those dating-era winter visits to her family, we drove over the bridges to Newport for dinner.  Her father drove.  Her mother occupied the front-passenger seat.  She, her brother (the originator of the “prior administrations” concept), I had jostled three wide in the back-seat.  At some key point, I believe when we were at the crest of the Newport Bridge, he leaned over and asked me what I thought about his sister.

Okay, do I say, “I respect her mind”, confess she is good in bed, or jump off the bridge.  Whatever I said worked.  We are still married and my brother-in-law tolerates my lack of nautical upbringing.  We enjoy winter nights watching movies while I patch my garden pants for the next season.  We enjoy debating history, the news (including alternative facts), and arts.  And, none of the above mottoes applies to sex.

Up here in the mountains, we have a saying, "You can't get there from here", which really means "We wouldn't go the trouble to do that". Another concept is that "If you don't know, we ain't telling." For the rest, you'll have to read between the lines.
View all posts by hermitsdoor →
This entry was posted in Farm Life and tagged Family & Friends. Bookmark the permalink.