Posted on January 8, 2017 by hermitsdoor 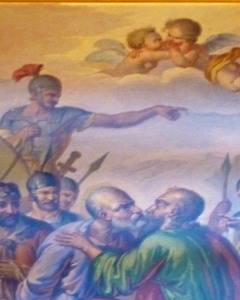 So then, dear friends, since you are looking forward to this, make every effort to be found spotless, blameless and at peace with him.  Bear in mind that our Lord’s patience means salvation, just as our dear brother Paul also wrote you with the wisdom that God gave him.  He writes the same way in all his letters, speaking in them of these matters.  His letters contain some things that are hard to understand, which ignorant and unstable people distort, as they do the other Scriptures, to their own destruction.

Tradition places Paul and Peter in prison together in Rome.  Obviously, from Peter’s writings, they had some degree of contact, though history does not confirm that this was direct.  They may have read each other’s letters, or heard about them from other Christians.  In any case, this fresco shows us their farewell.

Peter reaches out to embrace Paul, whose hands appear to be behind his back.  Though we cannot see the chains, this implies that he continues to wear the shackles of his imprisonment.  Behind and above him are a detachment of Roman soldiers.  No longer do they appear to be benign, or even interested in his teaching.  Now, their faces are stern.  They move with determination, as if they have been given orders, which we do not know about yet.

An image that we might recognize in our subconscious is the Roman soldier on horseback pointing with an out stretched arm and index finger.  This looks back to Michelangelo’s creation of Adam fresco in the Sistine Chapel.  Rather than being a commanding directional point, his elbow, wrist, and finger are slightly bent, suggesting a nearly lifeless arm, like that of Adam reaching out to touch the life-giving force from God.  But here, the soldier’s finger does not reach out to anything.  The space opposite his hand is empty.

I am ignoring those two putti figures in the sky.  I find them to be somewhere between a distraction and spooky in most paintings.  Oh, well, not all art symbols work for me.