Frescoes of Paul’s Ministry, Part 29: Paul and the Snake

Posted on December 4, 2016 by hermitsdoor 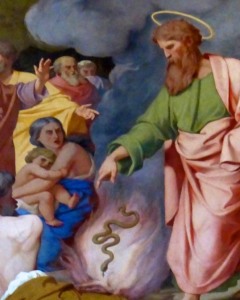 Once safely on shore, we found out that the island was called Malta.  The islanders showed us unusual kindness.  They built a fire and welcomed us all because it was raining and cold.  Paul gathered a pile of brushwood and , as he put it on the fire, a viper, driven out by the heat, fastened itself on his hand.  When the islanders saw the snake hanging from his hand, they said to each other, “This man must be a murdered; for though he escaped from the sea, Justice has not allowed him to live.”  But Paul shook the snake off into the fire and suffered no ill effects.  The people expected him to swell up or suddenly fall over dead, but after waiting a long time and seeing nothing unusual happen to him, they changed their minds and said he was a god.

In this fresco, we see Paul shaking the viper off from his hand into the fire, and various islanders responding.  The picture is divided into two parts, with Paul filling the right half, along with the clouds of smoke from the fire.  The left half contains half a dozen islanders.  In the lower center, the fire, brightly illuminates the snake as it falls.

The action of this event includes both the viper biting Paul’s hand and Paul casting it off without injury, and the people’s changing responses.  At first, they are welcoming and make the fire for the shipwrecked passengers and crew to warm themselves.  Then they condemn Paul, concluding that he will die from the viper’s bite and thus must have done something wrong.  When he does not die, the proclaim him to be a god.

The miracle of Paul’s lack of injury (or any conjecture that we might have to dismiss this as a miracle, rather that the viper did not really bite him) is less the question of this text, than the people’s assumptions: stranded people deserve to be treated kindly; bad people will receive justice eventually; only gods can be spared fate.  How often do we approach events, historical and current in our lives, through the filters of our beliefs?  How often does this distort what we conclude?  Paul was neither evil nor a god.

2 Responses to Frescoes of Paul’s Ministry, Part 29: Paul and the Snake