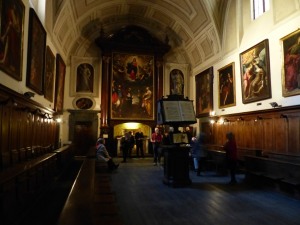 Before we complete the interior of the church structure, with the altar, let us explore some of the areas of the church which are more behind the scenes or outside.  In this post we will discuss the Chapter Room.   Behind the apse, or sometime underneath it, may be a chapel-sized room where the priests or nuns meet.  In addition to side doors leading to this area, there may be grated openings between the chapter room and the main church.  This allows sound to pass between the adjoining areas.

The function of the chapter room is for the priests or nuns to gather for their daily devotional studies, singing and prayers.  Literally, this is where they would read the chapters of scriptures according to the daily church calendar.  Rarely will you, as a member of the congregation, or tourist, be allowed to enter the chapter room.  However, if you visit a protestant cathedral you may see a hint of this in the choir, which became situated between the altar and the apse. 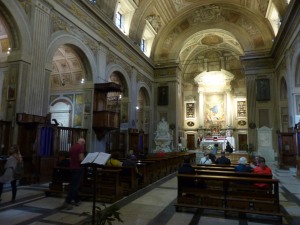 On our last evening in Rome, we went to Santa Maria della Concezione dei Cappuccini for a tour of the church and concert of Renaissance music.  The first half of the program was in the main sanctuary.  For the second half, we were taken back into the chapter room.

What a difference the size and building material of the room made.  The main structure of the church, moderate in size, was constructed of stone and plaster, with several side chapels.  The chapter room, much smaller in volume had mostly wood-paneled walls and a barrel vault ceiling.  The nave provided much more space for the music to resonate, while the chapter room provided a warmer tone as all that wood picked up the notes.

I recall a couple of other visits to church in which the chapter room factored in the ambiance, though I never saw the room.  This is the function of those grated openings between the chapter room and the sanctuary.  During a trip in Tuscany some years ago, we spotted a hill-town about lunch time.  We thought that we could find a local shop for some bread, cheese, and sliced meat.  We parked outside the walls of the town and walked in through a gate in the wall.

As we entered we noticed a church.  We entered it out of curiosity.  As our eyes became accustomed to the natural lighting inside, we became aware of music.  I thought that such a remote church having continuously running music was odd, given the infrequency of tours stopping by.  Then I realized.  The priests were in the chapter room, carrying on their daily prayers and hymns.  How easily angels could have been projected in that space, were we receptive.

Up here in the mountains, we have a saying, "You can't get there from here", which really means "We wouldn't go the trouble to do that". Another concept is that "If you don't know, we ain't telling." For the rest, you'll have to read between the lines.
View all posts by hermitsdoor →
This entry was posted in Travel and tagged Faith, Historic Places, Music, Rome. Bookmark the permalink.

2 Responses to Building a Roman Church: The Chapter Room