From the Bookshelf: The Righteous Mind, by Jonathan Haidt 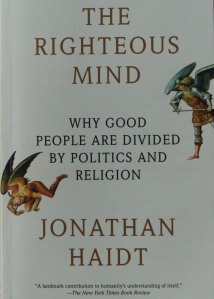 Let’s say my neighbor is planning to have a yard sale on Saturday. Friday evening, I notice that she has set up some tables and furniture, over which she has placed tarps. I see an office chair under one of the tarps. Saturday, I stop by the sale, with plans to only spend $30. I easily find this, that, and the other thing totaling $30, but bypass that office chair priced for $10. I hand my neighbor two twenty dollar bills, get my change and return home with my box of stuff. Monday, I notice that she has put a pile of boxes out for the trash collectors. These are full of the stuff that no one purchased. I fill my truck up with the boxes, some furniture and the office chair, grumbling about my neighbor’s waste, as I head to to local charity shop to donate the truck-load of stuff. I drop off the pile, and drive home with the office chair in my possession. When did I make a moral decision in this situation? This is the question that Jonathan Haidt asks in The Righteous Mind.

Historically, philosophers have debated whether emotions or reason guide our moral decisions. For instance, my Friday and Saturday moral decisions might be considered logic-based (I should not steal, lest someone steal from me; shop within my budget). However, Monday I might have acted out of anger toward my neighbor because she did not donate the unsold items. Haidt argues that neither emotions nor reason explain my behavior. Rather, I acted on my intuition, then explained why I acted so.

Haidt investigates the question of what influences our intuitions. He identifies three primary types of moral intuitions: divine guidance, individual autonomy, and community interaction. With these ideas, Friday night, my Christian upbringing would resound with one of the 10 Commandments (do not steal). Saturday, I acted as an individual who chose to stay within my budget. Monday, I acted with concern for community, both reducing deposits in the landfill, and providing a charity with a donation.

As the subtitle implies, Why Good People are Divided by Politics and Religion, Haidt applies these ideas about moral decision making to culture and politics. Each of the three influences have potential for conflict. People with different spiritual beliefs or religious traditions may hold opposing moral beliefs regarding relationships, use of wealth and possessions, and the interaction between human and natural phenomenon. Whether someone acts with ideas about individual liberty verses community connections will affect his or her opinion regarding privacy, property use, taxation, affiliation, etc.

Obviously, Haidt views nearly every decision and action that someone makes as having some level of moral implication. He cites many studies to support his framework, including several other layers that I will not try to outline, but let you read and contemplate. Haidt’s purpose is not to give moral advise or identify truth. Rather, he wants to set out a framework for how moral decisions function for individuals and society. With some introspection, we might recognize our comfort zone. Then, by applying other perspectives, we might spend less energy on justifying whatever we are doing, and invest more of our resources understanding our impulse to act thus.

Up here in the mountains, we have a saying, "You can't get there from here", which really means "We wouldn't go the trouble to do that". Another concept is that "If you don't know, we ain't telling." For the rest, you'll have to read between the lines.
View all posts by hermitsdoor →
This entry was posted in From the Bookshelf, Reviews and tagged Faith, Philosophy. Bookmark the permalink.

8 Responses to From the Bookshelf: The Righteous Mind, by Jonathan Haidt