Buildling a Roman Church, The Basilica 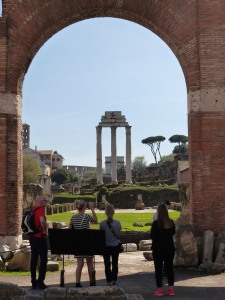 The Greek temple structure was prescribed by the weight-bearing capacity of stone and wood.  Our vision of ancient ruins is either of a bunch of stubby column bases, or possibly columns, with a few support structures around the outer rim.  These are all stone, as the wooden supports have either burnt or rotted away.  However, the stone supports have rectangular cuts in them, where the wooden roof beams would have been.

Most Greek temples contained a outter rim of column, spaced closely with hefty stone beams.  An inner wall sheltered the god’s statue and altar.  Not much too it.  The weight-bearing capacity of stone columns is vast, but the weight-bearing capacity of stone beams is relatively low.  Big columns, close together was a physics issue.  Wood beams, which has a stronger horizontal weight-bearing capacity, allowed the width of the temple to be spanned to provide a roof.  The Roman architects perfected the wooden truss system, with two diagonal beams forming the triangle of the roof support along with the flat beam spanning the space.  This is essentially the roof truss system used in most wooden buildings today. 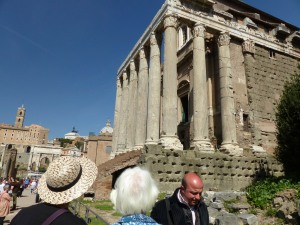 As I noted in my blog on the foundation of a church, small temples worked for the Greeks and Roman, because the general public only needed to pass by, rather than gather inside.  For Christian congregations, this presented a limitation for their style of worship.  They needed a larger  interior space.  While the early churches may have adopted the Greek raised foundation and steps entry, they build (literally) on the Roman basilica.

The Romans figured out that they could double the span of the roof of the temple by adding an interior set of stone columns.  This provided the strong weight-bearing capacity of closely spaced stone columns and beams.  The outer rim of columns could then be the same distance from the interior columns, resulting in  tripling of the interior space (1/3 in the middle area, 1/3 on either side aisle).  A wooden lower roof could be erected between the inner and outer columns, and a higher wooden truss system could be build over the middle section.  Thus, not only was the interior space wider, but the two level roof allowed for a series of clearstory windows to illuminate the interior.

As I mentioned, the Romans did not use the basilica for religious buildings, but for public spaces, such as courts, and some sections of public bathes where attendees would exercise, gossip, make business deals, etc.  The wider basilica structure gave the Christians more room for members to gather.

The photos above are from:

1) The Basilica Julia in the Roman Forum (looking through an entry arch, down the row of columns, toward the three columns of Temple of Vetsa)

2) The Temple of Saturn in the Roman Forum

3) The Temple of Antonius and Faustina in the Roman Forum, now the built into the front of San Lorenzo in Miranda.

5) San Lorenzo Fuori le Mura, showing the wooden beams in the side aisle, though without light from windows, the dark wood does not show well.

Up here in the mountains, we have a saying, "You can't get there from here", which really means "We wouldn't go the trouble to do that". Another concept is that "If you don't know, we ain't telling." For the rest, you'll have to read between the lines.
View all posts by hermitsdoor →
This entry was posted in Travel and tagged Roman Holiday. Bookmark the permalink.

5 Responses to Buildling a Roman Church, The Basilica