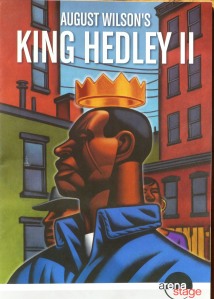 Does race matter? With events in our culture recently, we are confronted with arguments to blend ethnic heritage as well as maintain boundaries between distinct groups. But, should race matter when we go to see a play? We have seen plenty of plays that appear to cast without regard to the racial background of the actors. And, we have seen plays that made conscious decisions to cast characters with a specific racial identification. We have attended plays in which nearly every seat was filled by audience members of the same racial group. When we were preparing to attend a production of August Wilson’s play King Headly II at Arena Stage, some of the comments we received from friends included: “He wrote those plays about African Americans, right?”, “I’d like to see one of his plays with a black audience. It would probably different from when I saw it in the middle of a white audience.”, “His plays are rather dark (double meaning, intended)”. These comment suggest that race does matter.

In our cultural egalitarian mode, most theatres which we attend are likely to cast actors in a color-blind manner. Some times this has little affect on the play, in that we suspend our observations of skin tone. If they perform well, we do not notice what ethnic group the actor comes from. This can even be stretched to the point of improbability, such as an African American father have a Caucasion daughter. But, the director or cast is not trying to make a statement, other than that each actor can portray those characters skillfully.

On the other hand, we have also seen productions in which the director uses color-conscious casting to make a statement, or to achieve an affect. We saw a projection of Othello in which Othello was black and Iago white. Being black was not assumed to be evil. In a recent production of My Fair Lady, rather than English-Cockney style portrayal of the common folks, the director cast Chinese heritage actors, arguing that a large Chinese community existed in East London in the last 19th century. This expanded the theme of the elite class controlling the labor class by also suggesting that Euro-centric academics assumed that they can get the rest of the world to conform to their standards.

At times the racial intent of the casting is not clear. For instance, in a recent production of Tuesdays with Morrie, James Creer, who is African American, portrays journalist Mitch Albom, who is Caucasian. Was this a matter of casting a talented actor in a role that he could perform well (i.e. color-blind), even though Mitch Albom is white? Or, was the director making a color conscious statement that an African American man could get a bachelor’s degree in sociology, then a masters degree in journalism, construct a successful career as a sports commentator, and form a caring relationship with a Jewish man (i.e. confronting our biases that African American men are not fit for professional roles, or compassion)? Or, was the director suggesting that if an African American were a journalist, sport would be the section of the news that he belonged, not as a national or international reporter, or anchorman of the newscast (i.e. limiting his role to our expectations)? Obviously, intended messages may be missed or misinterpreted when not clearly articulated. Does race matter?

Our introduction to King Hedley II is the set of the Fichlander Theatre at Arena Stage. This theatre-in-the-round configuration presents a back-alley area between three sets of steps. It is a square of broken concrete, grit and dirt. At the top of each set of steps are chairs, milk crates, cider blocks, and stacks of newspapers where the cast will sit for the full play, except when they are on stage in scenes. The program informs us that we will be in inner-city Pittsburg for the duration of the performance. When the all-black cast walks in from below the stage, looking directly at the audience on all sides, it is evident that race will matter in this play.

Quickly, we are transported into the inner dialogue of the six people who meet in various pairs and groupings. Stool Pigeon (Andre De Shields) sees divine intervention and prophecies in every action. King (Bowman Wright) struggles to establish and defend his position and identity. Ruby (E. Faye Butler) lingers about, after her sister’s death, wondering where next month’s rent will come & how soon she might be able to move into the senior apartment building. Mister (Kenyatta Rogers) is King’s friend, and business partner in selling refrigerators and holding up local businesses, hoping to collect enough money to open their own business. Tonya (Jessica Frances Dukes) is King’s wife, who wants King to be at home, while she is working to pay the bills and prepare for her 17 year-old daughter to bear her first child. Elmore (Michael Anthony Williams) struts back into Ruby’s life, always one hustle ahead of King.

What is evident throughout this play is that community is what matters to the group of actors. Family and neighbors are so emmeshed that the boundaries of this community blur constantly. Community helps to define who each person is.  But, community also constrains what each person can do

King (Hedley II) looks to his father (King Hedley I) for his sense of identity. But, he never knew his father, who died when he was a toddler. The community defines King by how they relay stories about his father. But this same community confines King by what they do not tell him, as well as how they drain his ambitions to do something that he can say is his own.

Ruby and Tonya take roles that define women with in their African American community. Ruby looks back at her youth, when she sang in a jazz band that toured African American cities . Tonya left her youth when she became a teenage mother. Making a home for her daughter has consumed her life, especially during the seven years that King, was in prison. Ruby is constrained by this same community because the secrets that she wants to take to her grave. Tonya is constrained as she sees her daughter repeating the teen-mother role. Surviving and paying the bills is all these women have to look forward to.

Mister and Elmore are hustlers of two generations. Elmore has been extracting a living by tricking people into owning him money. Mister is works the streets to find anyone whom he sees a vulnerable. On the surface, they appear assured in their ability to out-wit and intimidate others. Their insecurity is evident in their need to find the next victim, before someone scams them. But, this identity also constrains them, as they cannot step out of the mind-set of gaming people to conduct a legitimate business.

Stool Pigeon is the fringe person, which every community has. We all know them: the unkempt yard, the recluse, the cat-lady, the night-stalker, et al. In this community, Stool Pigeon’s near psychotic rants take on a religious themes. Wailing, preaching, reciting prophecies, making proclamations are how he interacts with the neighbors. Yet, he sees who they are and what their fates will be. At the same time, the other characters cannot see him beyond his religious persona.

This raises the questions of whether ethnically identified plays contain universal themes, or are mainly explorations of the communities which they portray. Does King Hedley II relay themes about individual identify within community affiliation? Do audiences walk away with greater awareness of our own identities and how our own community provide this as well as constrain our options? The same questions should be applied to plays we view as classics: Oedipus Rex, Hamlet, Macbeth, The Importance of Being Earnest. What does Greek or Elizabethan tragedy, or Victoria comic satire have to do with 21st century life? Yet, we go to these plays endlessly, and possibly walk away affected by them.

As I mentioned, as the actors entered the stage, they circled the theatre-in-round looking directly at us in the audience. At intermission, before the actors left the stage, King rages that he will be someone. He does not address this to the other cast members on stage, but looks out at us, yelling at us. Are we the community, the rest of the city, the suburbs, the history of how African American community became isolated in the middle of northern cities, which circle this play?

During the intermission, the question of the length of the play was part of the audience conversation. The play was predicted to be three and a half hours long. We were one and a half hours into it. Could scenes be cut? Could soliloquies be shortened? Could the pace be tightened up? I offered an alternative perspective. The purpose of the interaction was not to advance the plot, but to wear us down. The characters in this community were exhausted by their lives. For a few hours, we would experience that exhaustion. This play was not about ideas but about experience.

A second observation about community that I sought was the question about the racial background of the audience. Arena Stage has a history of developing diverse audiences. The majority of us are from educated, European heritage. But, they also select and direct plays that appeal to the African American and Gay communities in Washington, D.C. At our performance, about ¼ of the audience, were African American. This included both couples on either side of us. By their attire and interaction with us, I suspect that we had more in common with each other, regarding education and professional careers, than any of us had with the characters on stage. Yet, they responded at different points of the play from when we did. And, in addition to our style of restrained laughter at selected points of humor, they talked in the style that I have seen in African American churches. Exclamations of agreement and encouragement to the character to “tell it like it is” broke the usual audience decorum.

Back to those Greek, Elizabethan, and Victorian plays, the social community portrayed in those scripts, which are usually royal and gentry classes, have as little to do with the audiences filled with merchant and labor class folks, as did this educated and profession class audience watching a play about inner-city African American folks. What do we walk away with, when the play is not about whom we are? As we left the theatre, walking along the sidewalk to our cars that would return us to our safe neighborhoods, I noticed a tall, African American man, walking by himself, carrying what appeared to be his worldly possessions. He was not part of the audience filing out of the theatre. I wondered was he Stool Pigeon wandering in his inner religious world, King beaten down by the community which waited for him to fail, Mister or Elmore no longer able to hustle his way through life? I wondered what stories he would tell. Our eyes never met. Does race matter?

Up here in the mountains, we have a saying, "You can't get there from here", which really means "We wouldn't go the trouble to do that". Another concept is that "If you don't know, we ain't telling." For the rest, you'll have to read between the lines.
View all posts by hermitsdoor →
This entry was posted in Lights On Stage, Reviews and tagged Arena Stage, Culture, Theatre. Bookmark the permalink.