Are Our Parks National?

With our federal government beholden to the rigid politics of the Tea Party, many travelers have become aware that National Parks are not on the list of “essential services”.  I’ve chimed in on the politics of the budget antics on other bloggers’ sites, so I shall not address the merits and flaws of health care reform or government shut-downs here.  But, I have been thinking about those National Parks, including our local Shenandoah National Park and numerous Civil War Battlefields, that are being held hostage.  Are our National Parks National?  If so, why?  If not, what alternatives might we consider for their administration and use?

Yellowstone was the first designated National Park in 1872.  A primary concern at that time was western moving settlements that threatened to break up open countryside.  Often these settlers would use marginal land for a few years, then move a little further, leaving behind exposed and exhausted land which was at risk for erosion.  For a century the federal government designated more National Parks, as well as National Monuments, National Forests, Bureau of Land Management regions, and various Reservations for Native American groups.  Development pressures for town, resorts with golf courses, and folks (like myself) wanting a wilderness homestead are still present, but mostly directed toward privately owned farms, forests, and mountain property.

However, over the 20th centuries, through government programs and private environmental advocacy organizations, we have come to realize that some locations can not be replaced once developed for private or other public use.  Yosemite National Park preserved a spectacular glacier-carved valley, while Hetch-Hetchy valley was flooded to supply water for the San Francisco Bay Area cities.  Private land use that might jeopardize ecosystems and endangered species is now scrutinized.  Conservation easements to voluntarily restrict use of undeveloped land are more common.  While development pressure still exists, what options might we consider for natural and historic places?

National Parks.  We could keep the current system, once congress works out it squabbles.    The federal government owns and manages the land with federal employees.  Concessions (lodges, restaurants, transportation within some parks, etc.) are usually contracted out to private companies.  Obviously, government shut downs, such as we have recently, will continue to be a risk.  This is an international embarrassment, for our landscape is a major attraction of foreign travelers.  More subtly, being managed by the federal government puts the parks are risk of other forms of politics, such as prior policies to suppress wildfires and restrict hunting, which as lead to excessive build up of forest, massive wildfires, pine bark beetle outbreaks, and over-population of herds without predators.

State Parks.  If the federal government were to divest of the National Park concept, one option would be to transfer the lands to states.  As many of these parks support tourist industry, states would have a vested interest in managing the parks well.  Local motels, restaurants, museums, shops, etc. support employment and tax revenue.  States are more aware of this than government bureaucrats across the country.  States obviously agree, as they manage a set of state parks already.

On our recent drive along the California coast, we stopped at several state parks, including Point Lobos and Hearst Castle.  To the former, we paid about $10 for our van to enter.  At the later, we paid $25 per person for tours.  I image that our fees have turned around pretty quickly to pay for salaries of the rangers and guides, who have turned it around to pay for their housing, food, children’s’ schooling, and maybe some entertainment.

Furthermore, states should be concerned with protecting watersheds and natural habitats.   Federal agencies (e.g. Department of Interior, BLM, and Environmental Protection Administration) tend to create too broad of agendas to apply to mountain ranges, prairies, wetlands, and ocean ecosystems without any regional understanding.

Of note, this week New York, South Dakota, and Arizona negotiated with the National Park Service to allow those states to open and run the Statue of Liberty, Mount Rushmore, and the Grand Canyon.

Public-Private Partnerships.  As I mentioned, National Parks’ concessions are mostly run by private contractors already.  Could more of the management be turned over to private hospitality companies?  A small, core federal agency (i.e. Department of Interior) could set standards and restrictions on land use, but otherwise allow companies to run the parks. 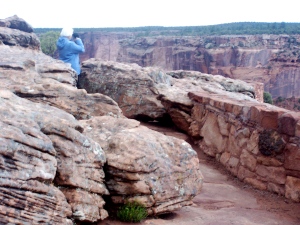 Though technically Canyon de Chelley is a National Monument, I shall use it as an example.  The federal government has partnered with the Navajo Nation, which occupied the canyon and plateaus as traditional homesteads.  The Thunderbird lodge and campgrounds are administered and staffed by Navajo citizens.  Only Navajo members may escort tourists into the canyon.  Applying this model to National Parks could get the federal government get out of the pay stream for managing parks.  Entrance or user fees would be the revenue to pay employees of the concession contractors.

Conservation Easements and Regulated Land Use.  I have heard that the Nature Conservancy is the largest non-government landowner in the world.  The concept is that the conservancy identifies key properties which fit its agenda.  For the Nature Conservancy, this is preserving habitats.  Other conservation organizations have other agendas which set aside land for archaeological preservation (Archaeological Conservancy), Civil War battlefields (Civil War Trust), historical homes and landscapes (The Trust for Historic Preservation), rails-to-trails hiking and bicycle paths (Rails to Trails Conservancy), or local watershed and river protection (in our region the Potomac Conservancy, and Cacapon and Lost River Land Trust).

While, often the scheme is for the organization to purchase tracks of land, adjacent to existing local, state, and national park lands with the intent of transferring these parcels into the larger park administration, some properties remain within the control of the organization for their private missions.  Those lands that do not become part of existing park system, have easements placed on their deeds.  These generally restrict development activity which would sud-divide the property.  While some lands may be left for nature to govern, many develop easement-business plans which allow some sections of the land to be use for agriculture, selective timber harvests, selective mineral exploration and extraction.

Montpelier, the home of James Madison, who drafted the Constitution, is owned and managed by The National Trust for Historic Preservation.  In addition to restoring the home to present the appearance that it had in Madison’s era, they conduct archaeological research on how the land was used during his life and subsequent events, such as a Civil War encampment on the grounds.  They host events, including living history days, symposium and author discussions related to the Constitution.

Rather than government agencies setting and guiding the standards of use, the conservancy administers the use.  As many of these conservancies have similar environmental, cultural, and history preservation interests as the national parks, could the parks be placed in easements for administration by the conservancies?  Could Glacier National Park or the Everglades be better run by the Nature Conservancy?  Could Gettysburg or Appomattox be run by the Civil War Trust?

Privately Owned and Operated Parks.  Given that the National Park boundaries and reputations are now well established, could the land and management be transfers to private companies to own and run, and pay business taxes on?  I am no fan of Disney, but they have demonstrated that they know how to manage tourist attractions, movie studios, and Broadway theatres.    They understand how to give the customer an experience.  They have also come to realize that the value of the property can be in preserving the majority of the property.  A major concern about turning over ownership of natural landscapes and historic sites is that the company will exploit the resources of the landscape and history’s detriment.  Could a Park Land, Inc. tourism oriented company maintain the quality of its property?

Briefly, the properties in Williamsburg were purchased over the past hundred years by one of the Rockefeller’s.  He wanted to eliminate the more recent structures, and return a section of the town to its colonial era presence.  Through the foundation that manages Colonial Williamsburg, archeological digs and archivists research the town and era, living history demonstrations are presented daily, and scenes from history are acted out and discussed in a series of interactive educational experiences.  When history was too pleasantly presented and white-washed, critics made their case for greater accuracy.  Given the patrons love of history, any detail out of line is likely to be noted and reported for correction.  Could this model be applied to a variety of other properties now protected by our National Parks system?

The risk in privatization of land is that the new owner will forget or change their mission without restriction.  It is one matter for one of my neighbors to decided to clear trees to make a field.  I may not like this, but it is his land.  National Parks are another matter.  I would suggest that any land transfer would need to have some level of easement to limit certain industrial activities or locating lodging, shops, and restaurants in sensitive environments.  However, I cannot imagine Park Land, Inc. destroying the viewscape of the Grand Canyon by allowing oil rigs on the north rim, or clear cutting the Great Smokey Mountains, or harvesting all the buffalo in Yellowstone for burgers.  That would only destroy their product and income.

Final Thoughts.  I am not advocating any of these positions, but merely presenting a range of alternatives.  Our political climate has become too polarized with only the extremes being discussed.  The answer is neither having the government-run everything for us, nor letting free markets be guided by the invisible hand.  Liberty gives us many options.  Each has benefits and costs.  We can choose from the range of ideas, building on the strengths of the idea and guarding against its vulnerabilities.  Free citizens do not have only one option.  Otherwise, I will just filibuster for another 1500 words…

Up here in the mountains, we have a saying, "You can't get there from here", which really means "We wouldn't go the trouble to do that". Another concept is that "If you don't know, we ain't telling." For the rest, you'll have to read between the lines.
View all posts by hermitsdoor →
This entry was posted in Reflections, Travel and tagged Current Events, Historic Places, National & State Parks, Opinion. Bookmark the permalink.

5 Responses to Are Our Parks National?