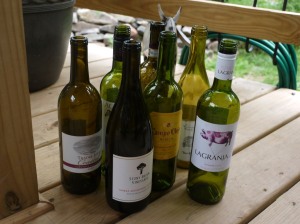 “Use it up, Wear it out, Make do, Or do without” was a motto that I grew up with.  Long before recycling become trendy or routine, we were recycling things. Hand-me-down clothes and toys worked well until we passed them along to someone else.  We were crushing cans since I was heavy enough to do so.  When I moved to NY and lived the winter on Long Island, while doing my first internship, I combed the beaches after the weekend, and hauled in enough tossed beer bottles to turn in for $10 to $20 worth of groceries.  Moving to the mountains required new strategies for recycling.

Technically, our solid waste carrier is required to provide recycling services to the region.  That does not mean that they need to make it easy to sort and drop off stuff.  Recycling occurs each Saturday morning, at one of four locations across the two counties that they cover.  The three closest locations to us are each about 30 minutes away.  Unless we have errands to run near those locations, the time and gas money are the first deterrents to extracting glass, metal, plastic, and paper from the trash.

Next, the recycling program is selective regarding what they will take.  Newspaper, magazines, and cardboard boxes are okay.  Tin cans go in, but not aluminum.  Glass can be clear or brown.  So what do you do if you drink beer in green bottles, or just about any type of wine?  Plastic?  Don’t ask. 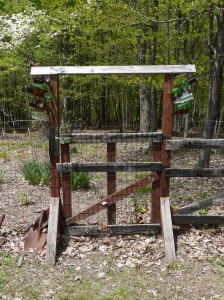 Early in our marriage, we travelled to New Orleans and the bayous.  While floating around the cyprus groves, we noticed bottles turned upside down on tree branches.  Our guide explained that these were bottle trees.  This was a tradition, in which bottles were placed such to catch evil spirits.  This sounded quaint.

Subsequently, we came across other sources that confirmed that bottle trees were a Southern tradition.  In addition to bottles being set out on tree branches, some folks put a pole in the ground with nails sticking out of it, on which bottles could be placed.  We played around with this as yard art concept, eventually settling on a set of bottles perched on one of our gates into the forest.  There must be lots of spirits out there. 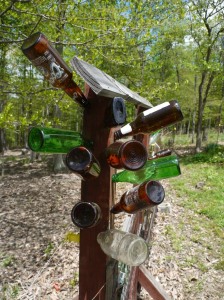 A bottle tree is a good place to recycle a couple of six-packs, but fills up too quickly to be a sustained program.  While touring a garden, we came across a walkway lined by bottles mostly buried in ground with the bottoms up.  The staff gave the explanation that this was intended to keep rabbits and other small critters out of the garden because the light reflecting from the glass startled them.  Hmmm.

I put these ideas together, and began lining our fences with wine bottles.  That should catch any spirits slithering along the ground, and distract ground loving animals from noticing our gardens.  I alternate from which side of the fence orient the bottles, such that 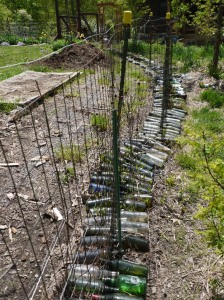 their necks face each other.  Whether these are filling up with spirits, I cannot say.

We do still have other types of recyclable materials that we have to find some place to deposit.  Thanks to suburban living friends, we send most of this to their recycle bins.

We are a little worried about our dogs drinking habits, though, as we often find piles of bottles and bones under the fruit trees.  They will not admit to anything. 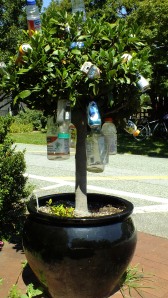 Bottle Tree at the National Arboritum

Up here in the mountains, we have a saying, "You can't get there from here", which really means "We wouldn't go the trouble to do that". Another concept is that "If you don't know, we ain't telling." For the rest, you'll have to read between the lines.
View all posts by hermitsdoor →
This entry was posted in Farm Life and tagged Gardening, History, Labor. Bookmark the permalink.