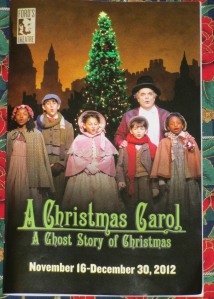 A tradition of theatres at Christmas time is to perform a Christmas show to draw in holiday spirited audiences.  Probably the most frequently performed script is some variation of Charles Dickens’ story, “A Christmas Carol”.  You can also see dozens of adaptation of this on DVD and TV, from the 1938 rendition with Reginald Owen , to Mr. Magoo, to Mickey Mouse, to The Muppets, to Henry Winkler, to Bill Murray, to Patrick Stewart, to…  Our preferred version is the 1951 black-and-white film staring Alastair Sim.  It’s really creepy.  If you do not know the storyline, I shall direct you to read the book.  Dickens actually intended it to be read, in an exerpted verion, out loud by families and friends gathered for Christmas Eve fellowship.

So, what would possess us to drive into Washington, D. C to see a production of  A Christmas Carol?  After returning from South Africa, having seen the play Red while in Cape Town, I contacted Edward Gero, whom we had see in the role of Mark Rothko at Arena Stage’s production of Red earlier in the year.  I wanted him to know that the show was getting an international audience.  He mentioned that he would be back in D.C. to play the lead role in the Ford Theatre’s production of A Christmas Carol.  When one of our favorite local actors takes on a role, we are ready to hop into town for the show.

For this blog, rather than discuss the whole production, which was well done, I want to focus on Mr. Gero’s challenges in performing the role of Ebenezeer Scrooge.  When taking on such a familiar role, in such a familiar story, the major risk is that the character does not gain humanity, with which we can empathize, but become a caricatures:  Bah-Humbug, snarl, better-they-reduce-the-surplus-population, grunt… turns to la-di-da, it’s Christmas day, buy-the-big-goose-be-back-in-five-minutes-and-I’ll-give-you-half-a-crown, life’s wonderful…  You might think that the role of Scrooge is so inheret in our conceptualization of Christmas that most actors could do it without reading the script.  I suggest that such familiarity makes protraying the role very difficult.

To our delight, Mr. Gero became the transformation in A Christmas Carol skillfully enough that at the curtain call, when he announced that the company had partnered with a local food bank to collect for those in need this season, our donations were heartfelt.

Beyond staging, propts, lighting, and costume, what the actor brings to a role are his voice, posture, and expressions.  In the opening scenes, in which Scrooge is demanding of Bob Cratchit (John Lescault), dismissive of the Solicitors (William Diggle, Michael Bunce),  and demeaning toward his nephew (Tom Story), Mr. Gero enunciates his lines with a sharp, staccato rhythm that is as punctuated as a skillfully aimed pistol.  He is not out to disarm those whom he views as wasteful of their resources, but to destroy them.  His posture is ram-rod tall, towering over Cratchit, who cowers at his clerk’s desk, and the street merchants who owe him payments on their loans.  His eyes are focused directly at his target, while quite aware of things out of place around him.  Cratchit cannot even slip an extra piece of coal into the stove without being shot down.  An errant farthing cannot slip from his purse without being accounted for.  Every motion is calculated, registered, and expedient to Scrooge’s only purpose of safeguarding his books.

The ghost of Jacob Marley (James Konicek) visits Scrooge in his bed chamber.  In firely lights, and goolish moans, Marley informs Scrooge that he (Marley) is bound by the chains that he forged in life. He warns Scrooge that he (Scrooge) has been fashioning a chain seven years longer in his life.  He foretells Scrooge that only by changing is attitude and behavior can he breaks these chains in life and death.  For the majority of the rest of the play, Scrooge entertains visits by the Ghost of Christmas Past, Present, and Future.

Duirng these scenes of metaphysics and mystery, Mr. Gero abondons the stern presentation of Scrooge the businessman.  Initially, with Marley’s ghost, his eyes alternate between wildly open and squinting at the illumination of this vision.  He slumps in his high back chair, nearly sliding onto the floor.  His voice qrivers, forming hesitating phrases.  Yet, his transformation is not thorough nor quick.  Transformations rarely are.  The new-man is always at risk for slipping back into the old-man.  Mr. Gero shows the struggle of Scrooge by bringing back the tall, commanding business man, until he confronts his own grave and grave situation.  There is more grave to Marley’s ghost than gravey.

The Nativity is a story about redenption through death.  We are not redeemed by the birth of a child, but by the knowledge that this child will grow up and give it’s life for others.  In many Renaissance paintings the Madonna has a sad expression and the Christ child lays limp in her arms, foreshadowing his death.  Scrooge’s transformation comes from his awareness of death of the body as well as the lost opportunities in life, and his ability to act on this insight.

Mr. Gero begins this process during his visit with Christmas Present, as they view the holiday gathering of his nephew and friends.  As they play a parolor game in which each recites phrases using a letter of the alphabet,  Mr. Gero begins to gester enthusiatically, bounce on his toes, and blurt out suggestions to the players, who of course cannot see nor hear him because this is a vision.  He is crushed when the word game mocks his stinginess by using his own phrases from earlier in the play.  In the scenes of Christmas Present and Future, set in Bob Cratchit’s home, when Bob honors his employer with a toast, Mr. Gero’s posture has softened to one of humble embarrassment.  His eyes are directed at the empty stool and crutch that will memorialize Tiny Tim (Holden Browne/Sam Ellis) should the events of time be unaltered.

A redemption story is about altering the course of what might be.  To do this one must change.  In the final scenes, when Scrooge is giddy with delight that he can act on his insights, his step is light as he moves quickly to elicit help from a boy to get the prize goose to send to Bob Cratchit.  His hand moves fluidly to take coins from his purse to give to carolers, or to shake the hands of merchants whose loans he forgives.  His phrases flow as stanza’s in a carol as he proclaims Merry Christmas.  And, to Mr. Gero, a Happy New Year.  May we see you on stage, again, soon.

Up here in the mountains, we have a saying, "You can't get there from here", which really means "We wouldn't go the trouble to do that". Another concept is that "If you don't know, we ain't telling." For the rest, you'll have to read between the lines.
View all posts by hermitsdoor →
This entry was posted in Lights On Stage, Reviews and tagged Music, Theatre. Bookmark the permalink.